Make It in Brooklyn: W Architecture

From their two-level studio above the Fulton Mall, W Architecture and Landscape Architecture’s team of international architects, landscape architects, and urban designers create meaningful spaces that engage both nature and urbanism. Over the past two decades, the firm’s award-winning work has revitalized urban waterfront sites such as St. Patrick’s Island (Calgary) and Tide Point (Baltimore), and transformed parks, plazas, and open spaces worldwide into enjoyable places for community gathering and connection.

After founding the acclaimed Cho/Wilks Architects in Baltimore and earning a Masters of Landscape Architecture from University of Pennsylvania, founder Barbara Wilks relocated in 1999 to establish interdisciplinary firm W Architecture as part of New York City’s thriving creative community. Today, Wilks is among the city’s leaders in the architecture and landscape architecture fields, known for her expertise in waterfront reclamation and her ecological approach to design. The firm has played an integral role in numerous high-profile public space projects citywide that have received national and international acclaim, such as The Edge waterfront park in Williamsburg, Plaza 33 at Penn Station, and West Harlem Piers Park. W Architecture’s work has been featured in more than 50 publications including Landscape Architecture Magazine, The Architect’s Newspaper, and French Architectural Digest.

Originally based in Dumbo, the firm had a brief stint in Manhattan before returning to Brooklyn and setting up shop in the historic Gage & Tollner building. Team members appreciate the unique architectural details of the landmarked space including big, bright windows overlooking Fulton Mall’s vibrant retail. The central location is also a major draw for both staff and clients, with excellent access to subway lines and proximity to green spaces at MetroTech Commons and Cadman Plaza for midday breaks. 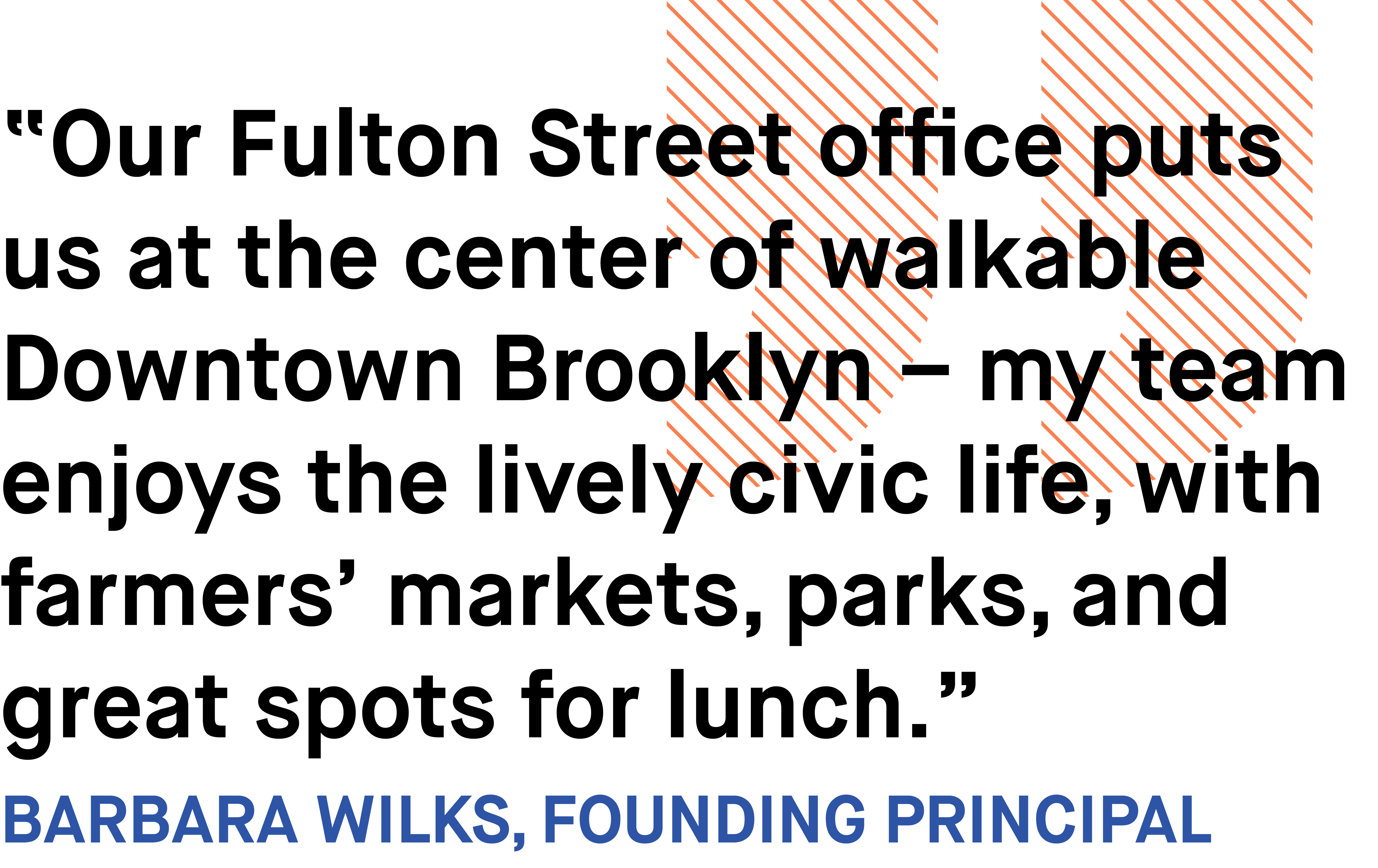 W Architecture’s work focuses on the interaction between nature and people, and the firm aims to create landscapes that support healthier, more sustainable communities. This is evident in projects such as the St. Petersburg Pier Approach in Florida, completed earlier this year, which connects the city’s downtown with Tampa Bay through increased pedestrian space, a new park, and public art activations. The firm’s design recently won a Waterfront Center “Excellence on the Waterfront” award, one of only eight global projects recognized this summer.

Explore office space opportunities and learn about financing and incentive programs that may benefit your business here.

Contact us at realestate@downtownbrooklyn.com to find out more about how we can help connect you with available space and resources.

Downtown Brooklyn Presents 2022 season brings more free music than ever to the neighborhood!