Temporary space will be open through Spring 2020, when further development of the 1.15-acre site will begin.

New York, NY – New York City Economic Development Corporation (NYCEDC), Council member Stephen T. Levin, the Downtown Brooklyn Partnership, and Community Board 2 today celebrated the opening of new temporary open space at the future site of Willoughby Square Park. The temporary space, which will provide 15,000 square feet for the local community, will be open until summer 2020. At that point, construction on the permanent 1.15-acre site is expected to begin.

In May 2019, NYCEDC announced a new plan to create expanded open space in Willoughby Square, which will feature over an acre of green space, new community amenities, and permanent public artwork commemorating the abolitionist history of the neighborhood. Design and development of the open space is being led by Hargreaves Jones. 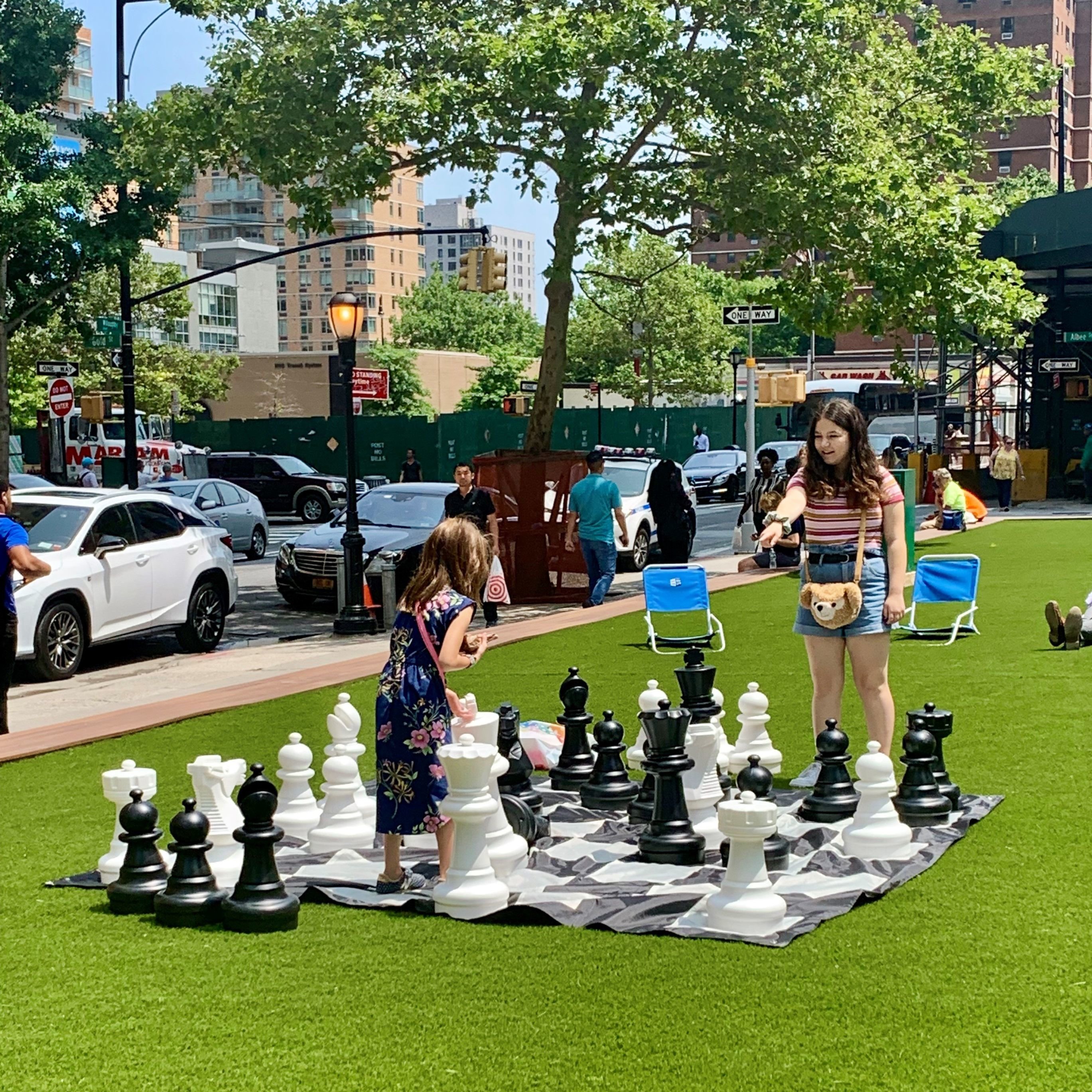 “When NYCEDC developed our new plan for Willoughby Square, we worked to ensure there was green space available for residents to enjoy this summer,” said NYCEDC President and CEO James Patchett. “We are excited to open this space and look forward to the continued development of the full site, which will be an important addition to Downtown Brooklyn.”

“We are thrilled to unveil this greatly-needed open space just in time for summer, giving Brooklynites a place to spend time outside and enjoy all the neighborhood has to offer,” said Regina Myer, Downtown Brooklyn Partnership President. “As plans for a permanent park proceed, I applaud NYCEDC for creating this temporary space, and we look forward to working on building a new park befitting the borough’s commercial, residential and cultural hub.”

“I’m thrilled to open this space for the community to enjoy this summer,” said Council Member Stephen T. Levin. “Thank you to EDC, Downtown Brooklyn Partnership and Community Board 2 for their commitment to deliver this vibrant new amenity for the Downtown Brooklyn neighborhood.” 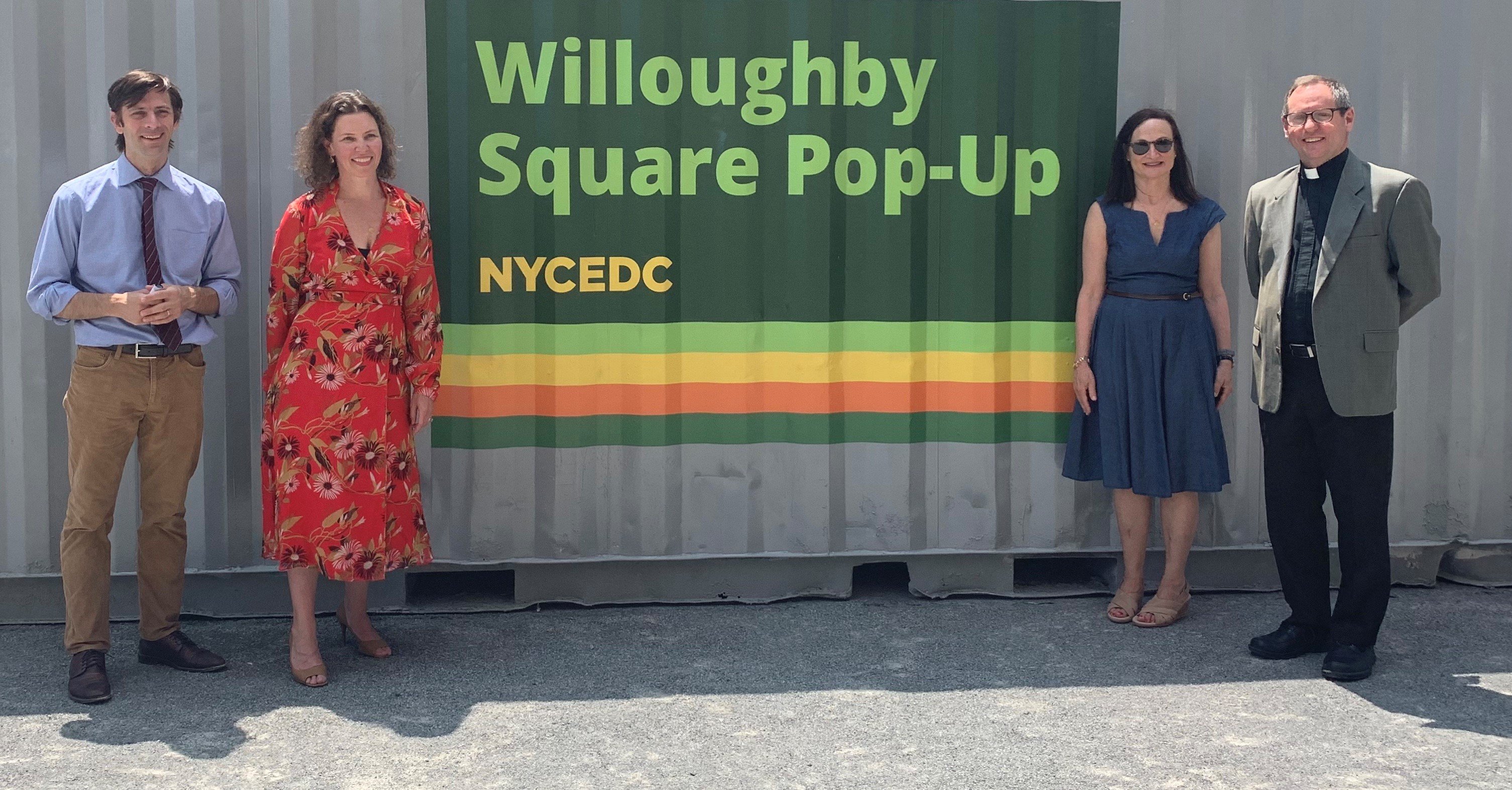 Planning for the development of Willoughby Square has been underway since 2010 when NYCEDC facilitated a community design process with residents, stakeholders, elected officials and City agencies. Located on Willoughby Street between Duffield and Gold Streets, NYCEDC anticipates completion the permanent 1.15-acre site by 2022.

In partnership with the NYC Department of Cultural Affairs’ (DCLA) Percent for Art program, NYCEDC will soon begin the process of selecting an artist to design the memorial commemorating the 19th century abolitionist movement with a particular focus on its ties to Brooklyn and the Underground Railroad. This builds on the work of “In Pursuit of Freedom,” a multifaceted public history initiative led by the Brooklyn Historical Society, Weeksville Heritage Center, and Irondale Ensemble Project that explores the everyday heroes of Brooklyn’s anti-slavery movement. Artists interested in being considered for the commission should send a request to percent@culture.nyc.gov.

Park closed for two decades re-opens to the public