Inside a programmers retreat in Downtown Brooklyn

How The Recurse Center came to Bridge Street.

There’s no sign on the door of 397 Bridge Street that one of the most interesting and unusual institutions in the tech world is located there. The Recurse Center is akin to a writer’s retreat but for computer programmers. Developers can apply to take part in a three month, self-directed program, learning new programming, pursuing personal projects, and finding work.

We stopped in recently to find out more about what happens at The Recurse Center from its director of operations, Rachel Vincent.

Downtown Brooklyn Partnership: Tell us, what is the Recurse Center?

Rachel Vincent: We are most simply an educational retreat for programmers with an integrated recruiting agency. It’s totally self-directed, so there’s no teachers, there’s no classes, no certificates, everybody decides what they want to work on and what they want to do, so it leads into a vibrant, diverse community of about 1,500 programmers.

“I really like that it [Downtown Brooklyn] feels like a New York City neighborhood in a kind of homier way. I love that there’s is a greater diversity here of people who are just out and about which is wonderful on every metric. Age is the most striking one to me. It’s nice to see kids around and older people.”

DBP: What are the kinds of things that people come to work on?

RV: It varies a lot. One person is building a programmable keyboard out of some modifiable hardware parts he bought on the internet. Other people are learning Rust, which is now the most popular programming language, above Python. We have one person who’s very interested in machine learning applications for generating fun toy programs. We have a website called joy.recurse.com that is just a catalog of projects.

DBP: Explain the recruiting part of the Center.

RV: All of our operations are funded by recruiting fees paid to us by our partner companies. We have over 100 partner companies all around the world, most of which are in New York and San Francisco. We don’t require anybody to come into the retreat agreeing to or even wanting to look for a job afterwards. Our philosophy on that is if we build the best place to be a better programmer and we admit people who are very diverse in their ranges of experience, what that will do is build a recruiting pool that’s very diverse and very good.

DBP: Why are companies interested in Recurse alum more than any other candidate pool?

RV: I think that’s something that’s very particular to us and that comes back to our admissions criteria and our diversity. Since we’re a free program, and we’re a little pedagogically weird, we approach admissions in a fairly particular way. We ask that people are smart, kind, self-directed, want to become dramatically better programmers, whatever that means to them, enjoy programming, and are intellectually curious. We don’t consider ourselves a boot camp, although we’re often compared to one. Companies can assume and trust that the people who come through RC are intellectually curious, which is I think one of the most important traits for a developer. And people who are nice. It’s hard to test that and you’re making a big investment when you hire somebody.

DBP: Do you find that tech companies are looking for non-white guys?

RV: Yes. We have many partner companies that are really looking to diversify their team and to be transparent. It’s hard if we have women or people of color who are in our community and they go into a technical interview and they meet the entire company and see they’re going to be working on a team of all white guys. They might not want to join that company. Sometimes there’s reasons for that. Sometimes it’s just a new company and they’ve been trying, but it’s really important as early as possible try to hire folks from non-traditional backgrounds. 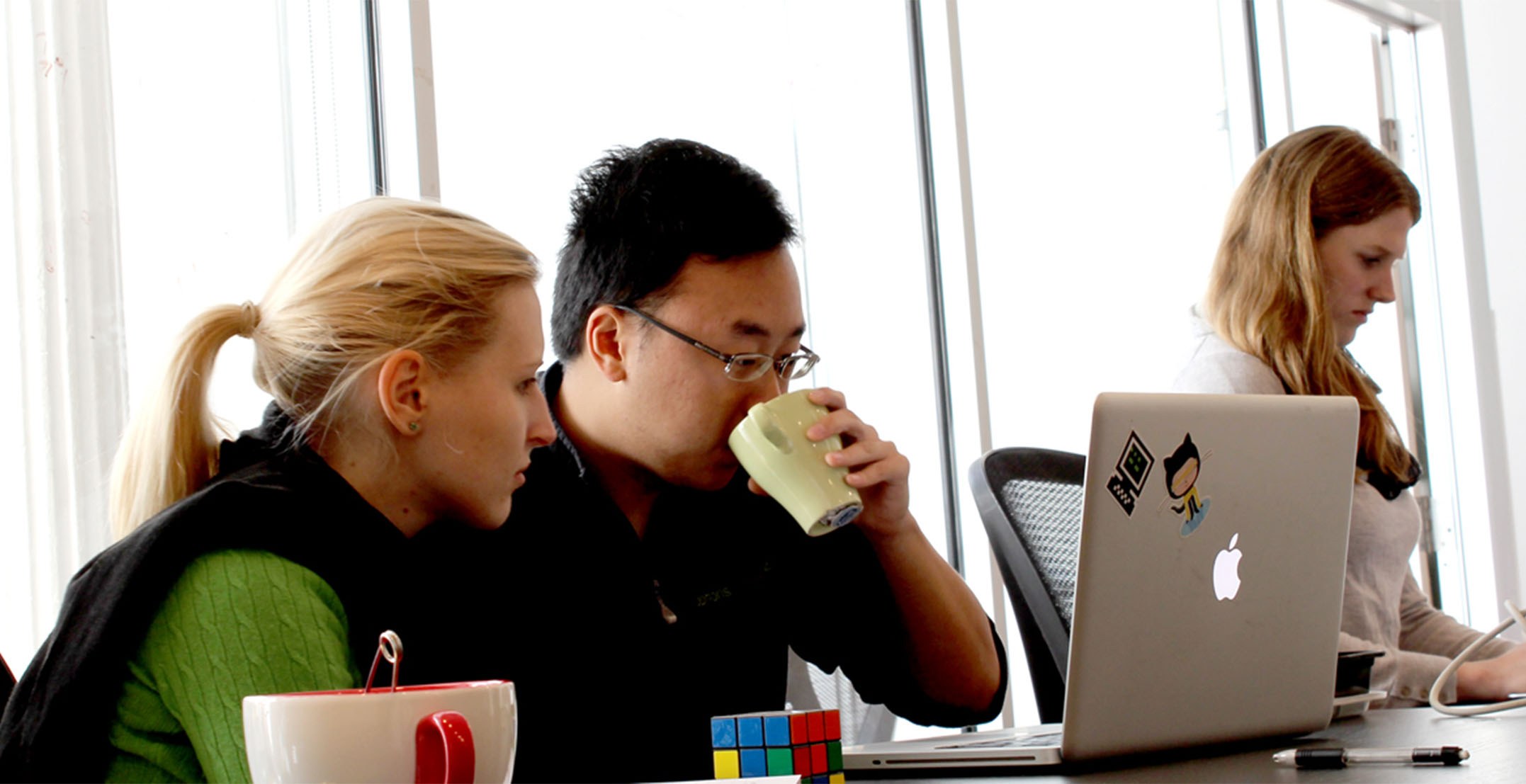 DBP: You must have alumni at a lot of big companies?

RV: Etsy’s a huge one, obviously. We have a great relationship with them. They actually funded our first big round of living expense grants in 2013. They’ve really understood us and been great advocates for what we’re doing, so lots of alums there. Peloton, which is a lovely company, a bunch of alums there. Two Sigma and Jane Street, those are financial services companies, those are both great, they have great workplace cultures there.

DBP: Why did you choose this office?

RV: We didn’t have a massive budget but we were midrange for Brooklyn real estate. We wanted to be close to as many modes of public transport as possible because we have people coming in from all over the world so we wanted people a) not to have to rely on one train line because we all know how that goes, and b) be able to get here from many different neighborhoods, and I think it’s kind of made the character of the batch a little bit better.

DBP: How has it made the character of the batch better?

RV: It’s not a trip for people to come in. A lot of people can live in Bed-Stuy and just walk up Fulton and get here and that’s really wonderful. We have people who live across the street now, and it’s easier for alums to come and stop by. Another thing we were looking for was 24/7 air conditioning, which is very hard in Manhattan to get. If you’re currently in a batch, the space is open to you 24/7, so you have a key fob and can come and go as you please. 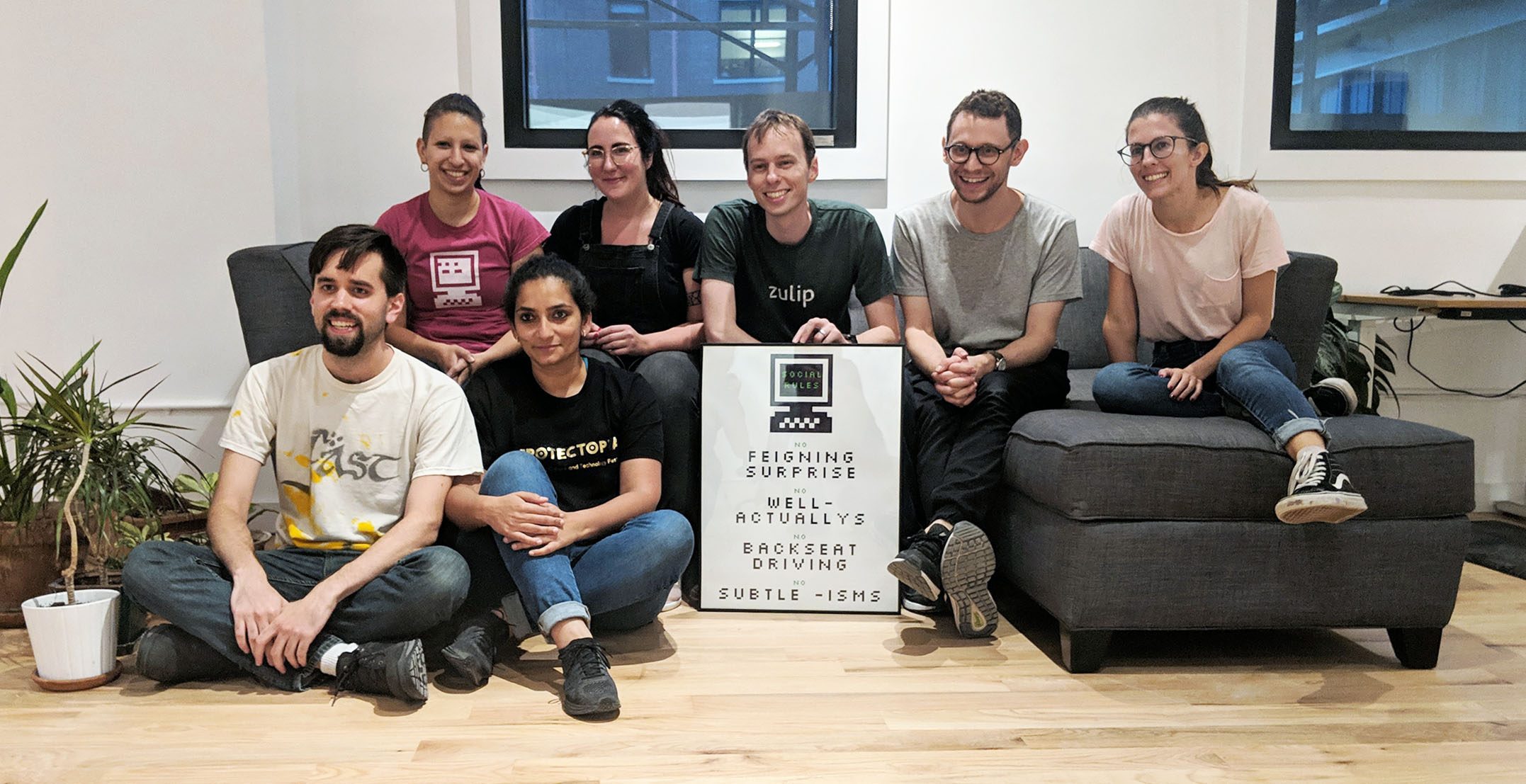 DBP: Beyond the transit proximity are there other benefits to being in this particular area?

RV: I can speak personally that I really like the food. In SoHo we had the benefit of being in a transit accessible neighborhood but most places you could go to eat around there were super expensive but most Recursers are not able to spend $25 on lunch. I’m from Queens originally and I really like that it feels like a New York City neighborhood in a kind of homier way. I love that there’s is a greater diversity here of people who are just out and about which is wonderful on every metric. Age is the most striking one to me. It’s nice to see kids around and older people.

Applications to become a Recurser are open on a rolling basis and a new cohort begins every six weeks. If you’re interested in applying, or interested in hiring a Recurse Center alum, check out their website here.

Photos courtesy of the Recurse Center.