How Dollaride wants to bring dollar vans into the 21st Century

A nephew of some of the first dollar van drivers in New York City, Su Sanni explains his vision.

Fresh off a win at DBP’s Make It in Brooklyn Innovation Awards for Rookie of the Year, Dollaride founder Su Sanni sat down with us last week to dive deeper into what his startup has in mind for the future of transportation in the outer boroughs and beyond. 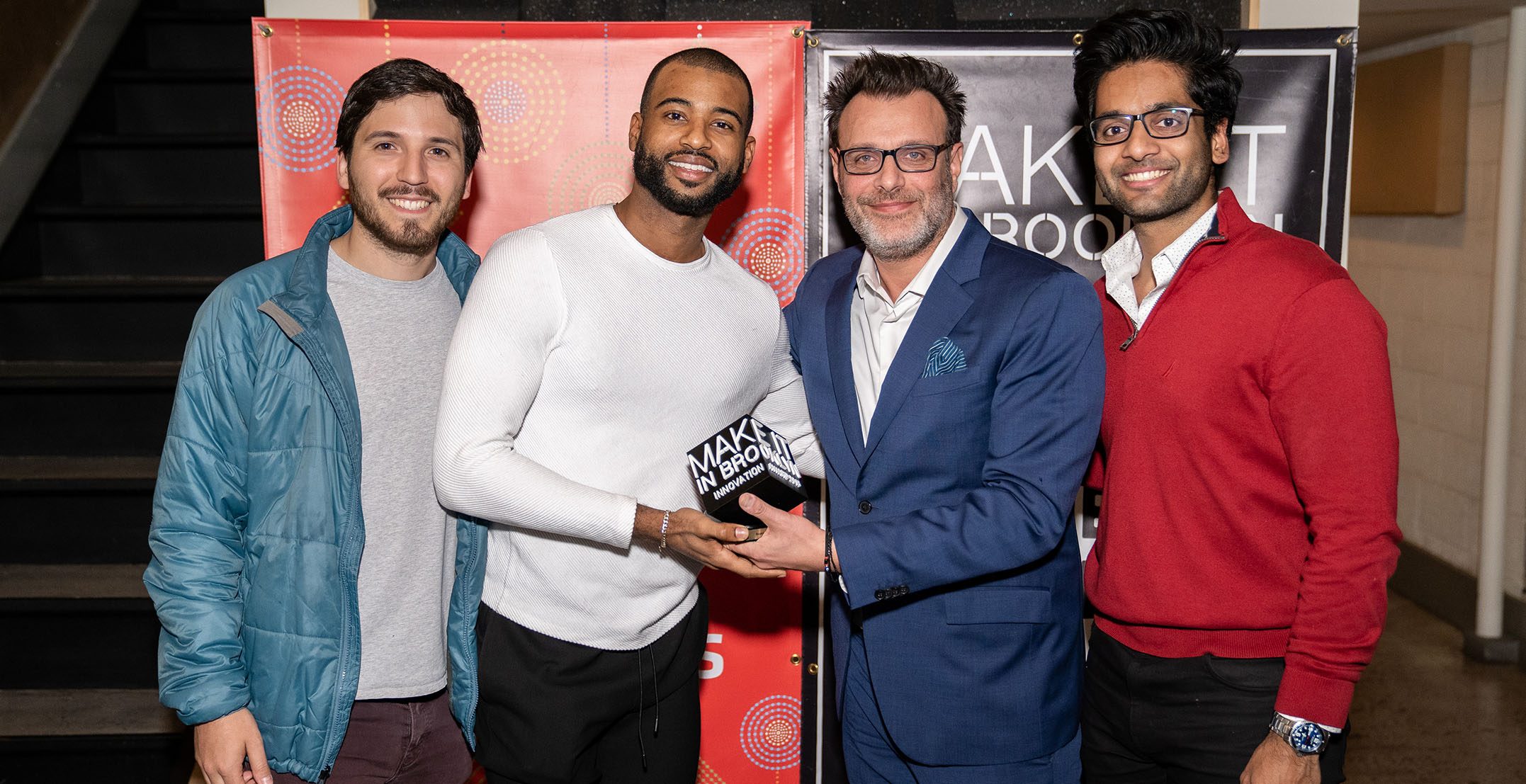 The Dollaride team accepts the Rookie of the Year Award at the Make It in Brooklyn Innovation Awards.

Su Sanni: You know, before we start, we actually got three emails today from winning Rookie of the Year. We haven’t even publicized it yet in any way. It was just people who were at the event, including one who seems interested in potentially talking business.

Downtown Brooklyn Partnership: Well that’s terrific, and really what we’re hoping will be the outcome of Make It in Brooklyn. But let’s start this off a little bit differently than we normally do. Could you tell us about your childhood and growing up in Brooklyn?

SS: Certainly. So I grew up in East New York in the late 80s, early 90s. I grew up in a public housing project called Linden Plaza. We were right across the street from the Louis H. Pink houses which is NYCHA housing and where I would go for summer camp and just hang out and play basketball.

DBP: And your parents are immigrants?

SS: They are, from Nigeria. My parents immigrated here in the in the ‘70s and they raised me and my two sisters in East New York, so we’re Brooklyn born and bred.

Just being hustlers, my uncles bought a van. They started out just dropping off their friends and family members to wherever the nearest stop was. It caught on and they started charging people $1. That’s where the name dollar van came from.

SS: Yeah. Two of my uncles also emigrated here from Nigeria. When there were MTA strikes in the mid-‘80s, it left this huge transit void in the outer boroughs, where people were relying on the bus to get to the subway. So, just being hustlers, my uncles (Lateef Ajala and Fatai Lasisi) and some other people in the area, bought a van. They started out just dropping off their friends and family members to wherever the nearest stop was. It caught on and they started charging people $1. That’s where the name dollar van came from.

DBP: Backtracking a second, give us a little more context on what a dollar van is.

SS: A dollar van is a fixed-route transportation system run by a network of independent drivers who pick up and drop off people. The drivers are most often immigrants or sometimes first generation Americans. A lot of the drivers come from countries where there is already a dollar van-type of system. In Jamaica, there are independent drivers who have vans or sometimes even cars, which are not run by the municipality or by the city. Similarly, in Nigeria, they’re called “danfos.” So that was how my uncles were able to make a living and then build a whole life around this business.

DBP: Fascinating. Let’s talk about what you actually do. What is Dollaride?

SS: So Dollaride is a mobility service for communities that are underserved by public transit. We built a mobile application that makes dollar vans accessible by making the routes and the drivers visible to you based off of your geolocation.

DBP: What’s the plan for how you’ll make money? Will there be a fee? 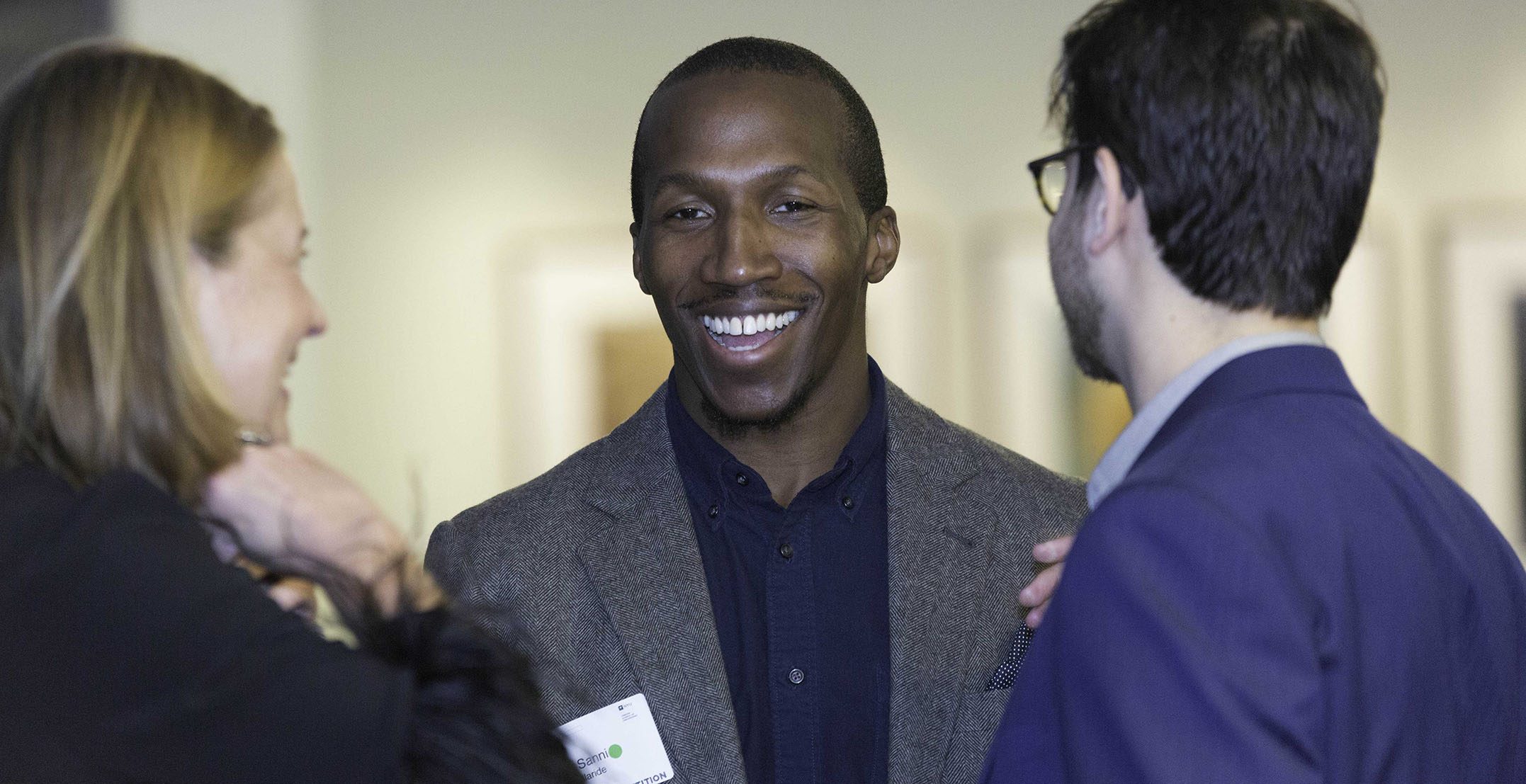 SS: So we make money in two ways. We charge the passenger a service fee for using Dollaride and paying for their fare digitally. That would be $0.50 cents or a dollar. So the driver still makes his $2 and we make the difference. The other way we’ll make money is with contracts or partnerships. There are companies that want to deliver mobility as a service to their community members. They can hire Dollaride to create a new route and we’ll do all the work of providing the drivers and the app and the reliability on that route so that their employees or community members can use that route to get to where they need to go.

DBP: That sounds like the work of an urban planner.

SS: Absolutely. In fact, we’ve partnered with NYU’s CUSP (Center for Urban Science and Progress) program and with urban planners WXY Studios. We recognized early that you need urban planners to really do this the right way.

DBP: You’re based out of NYU’s Urban Future Lab here in Downtown Brooklyn. How did you end up there?

SS: I was familiar with the Future Labs incubator system because I was a portfolio company of the Digital Future Lab with my last startup, WeDidIt. So I was already in the NYU family. When I started Dollaride, I applied to join the Urban Future Lab, which is specifically for companies like ours. I ultimately had to pitch at, and win, a competition in order to get entry into the Urban Future Lab.

DBP: You’ve expanded your team recently. How many are you now?

Dollaride has to make the driver the hero. We have to treat drivers like partners, like family, because they are the backbone of the entire service.

SS: There are actually nine of us. I’m scrappy, so our engineering team and the product manager are all remote. Four of them are living in Nigeria and Ethiopia and then everyone else on the team is here in New York City. I wanted to stretch my dollars as far as possible, but I specifically chose developers in Nigeria and Ethiopia because they live in cities that have dollar vans and I knew they could sympathize with the customer and the service.

DBP: Do you want to stay in Brooklyn?

SS: Absolutely. The connection I have being born and raised here means a lot to me. And I want to make some dollar van drivers millionaires by including equity in Dollaride.

DBP: You must have really studied what companies like Uber and Lyft have done in the field. What are some of the biggest lessons you’ve taken from them?

SS: Yeah. Sometimes from what they’ve done wrong. I think that Dollaride has to make the driver the hero. We have to treat drivers like partners, like family, because they are the backbone of the entire service. And at the end of the day, if the quality drivers aren’t making enough money or are being harassed for whatever reason, things will just fall apart. So we put an incredible amount of focus on creating relationships with our drivers and truly understanding the pain that they have. Many other companies have treated drivers just like a commodity, and squeeze them. That’s something that we can’t afford to do, and I couldn’t do personally because there are drivers in my family. So I really understand their struggles, and also, they see me at Thanksgiving.

We’re excited to see what the future holds for Dollaride and Sanni. Will they be able to modernize the grassroots system Sanni’s uncles helped create? Can they really help enrich dollar van drivers, while also providing a valuable service for the public? We’re rooting for them and supporting at every turn.