“By the numbers, Downtown Brooklyn is truly a college town,” said Edward Summers, Executive Director of BE.IN. “Not only are our academic institutions helping to drive economic growth, but by working together through our Brooklyn Education Innovation Network, they’re connecting local students with local jobs and providing them with the skills they need to succeed in Downtown Brooklyn’s burgeoning innovation economy.” 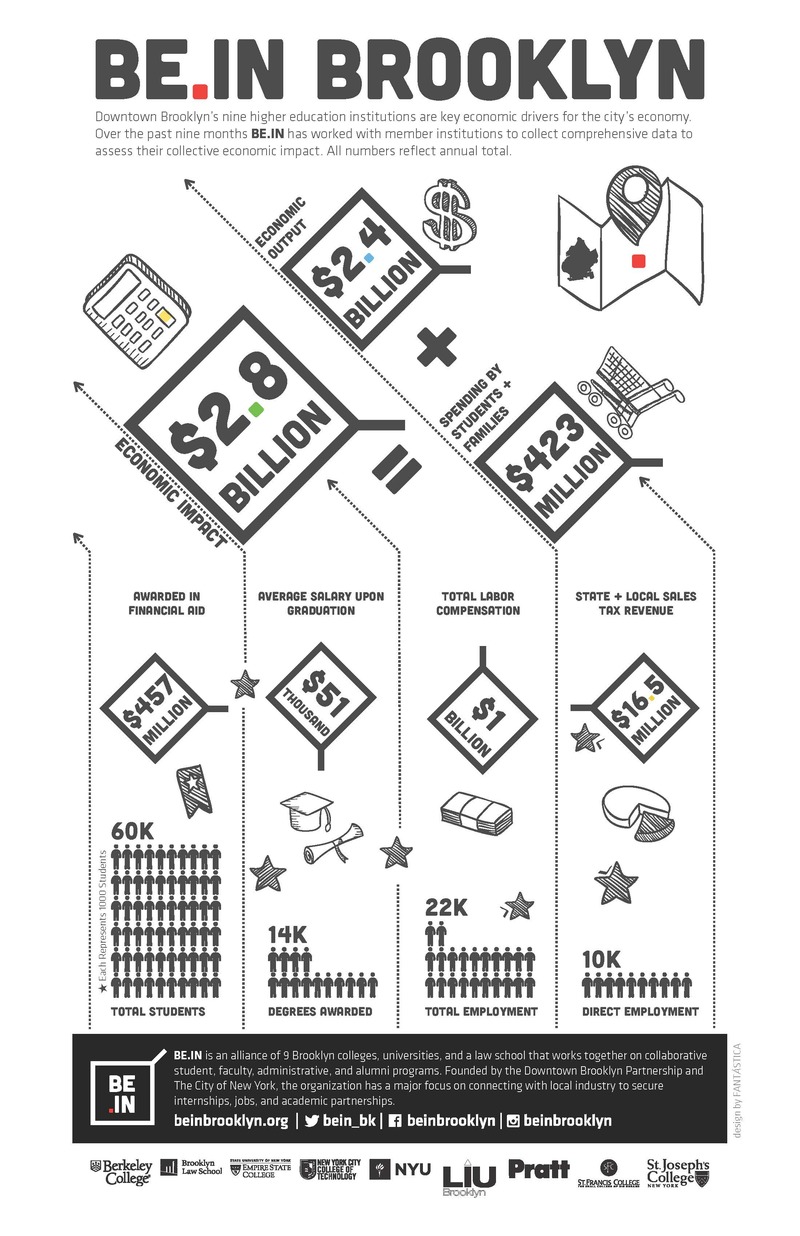 The idea for BE.IN was seeded in 2012, when the Partnership convened a meeting of the area’s college presidents to discuss areas of potential collaboration with each other and the broader business community. Quarterly meetings soon followed, as well as the creation of a number of initiatives: “College Town” Service Day projects, a local job board, and the annual Tech Triangle U symposium to connect students and faculty with companies in the Brooklyn Tech Triangle. Last year, the City of New York provided seed funding to formalize the budding network, and in January of this year, Dr. Eddie Summers was hired as BE.IN’s inaugural executive director.

In his first nine months on the job, Summers met with member institutions, local industries, and city representatives to discuss the direction of the organization, leading to the adoption of a comprehensive Strategic Plan which will guide the growth and development of BE.IN over the next three years. Arguably the main focus of the plan is to increase the number of job and internship prospects for BE.IN students and alumni. To that end, BE.IN has kicked off a series of networking meetup events, where representatives from local industries can mingle with career services employees from Downtown Brooklyn colleges to exchange information about internships and job openings.

Many in attendance at the first two meetups talked up the fact that BE.IN, in addition to creating a pipeline of local talent, also fosters a neighborly sense of community amongst industry and education.

John Abrashkin, the Director of Business Development at Honeybee Robotics, stated that although his company was located for thirty years in Manhattan, it’s only been since they recently relocated to the Navy Yard that they’ve felt “really connected” to a community.

“The benefit of relocating to the Navy Yard and connecting to the BE.IN network is that Honeybee gets to work in an industrial setting, but with all this talent and ideas nearby,” said Abrashkin. “When you’re in a business that pushes boundaries, it’s critical to be surrounded by spontaneous combinations.”

Attendees from BE.IN’s nine higher education institutions have found a lot to love about the meetups, as well.

“We always want to expand and open doors for our students,” said Amy Rothenberg, Director of Career Services for LIU-Brooklyn. “Individually, that might be hard, but as a consortium, we can identify talent, build a pipeline, and foster stronger relationships. There are 60,000 students in Brooklyn—companies should be able to recruit here.”

Brynna Tucker, from Pratt’s Center for Career and Professional Development, and Ellen Burti, the Director of Career Development for St. Joseph’s College, both talked about the “college town” vibe that lay dormant for decades in Downtown Brooklyn, and which has now been activated in large part due to BE.IN’s efforts.

“There are all these colleagues I’ve been a subway stop away from!” Tucker said. “There’s a mission-driven yet neighborly quality to BE.IN.”

Added Burti: “There are great opportunities for me to come to a meeting at the consortium and realize what great resources and opportunities are available in Downtown Brooklyn, which I can make my students aware of.”

The slate of events for BE.IN is chock-full in the immediate future. Fall programmatic plans include a November pitch contest for BE.IN college affiliates (students, alumni, faculty) who have started Brooklyn businesses presented in partnership with Make It in Brooklyn, and themed career conversations with students and local industry hosted by member institutions.

To learn more about BE.IN and upcoming events, click here.

Record turnout for day of service at Cadman Park