The report draws from data compiled by 36 of the area’s 60 cultural institutions, including the Brooklyn Academy of Music, the Brooklyn Historical Society, and BRIC Arts | Media, in the following economic categories: operations, construction, food and beverage sales, and retail sales. The report also found these groups book over 8,000 hotel stays, injecting even more economic and cultural capital into the neighborhood in 2013.

“The Downtown Brooklyn Arts Alliance (DBAA) was pleased to collaborate with the Downtown Brooklyn Partnership on this study,” noted Dorothy Ryan, a member of the DBAA Steering Committee. “We applaud the Partnership’s efforts to promote the incredible contribution of cultural organizations to the vibrancy, economic development, and educational and community service to the businesses and residents of Downtown Brooklyn.”

The survey area includes institutions in and around the Brooklyn Cultural District, bordered by DeKalb Avenue and Hanson Place on the north and south, Fort Greene Place on the east, and Flatbush Avenue on the west. In recent years, cultural development has skyrocketed in the area, spurred by hundreds of millions of dollars in private investment, donations, and city capital funds. $132 million was spent on construction last year alone, for venues like BAM Fisher, a 250-seat theater, rehearsal, and performance space, and the Polonsky Shakespeare Center, the new home for Theatre for a New Audience. Other projects, large and small, of note to open or break ground in the last few years include a new BRIC House in the former Strand Theater, a renovation of the Brooklyn Historical Society’s landmark building, BAM South, and the 18,000-seat Barclays Center.

The report also detailed the large number of free educational programming and performances provided to Brooklyn students and families by organizations in the Cultural District. Last year, over 64,000 Brooklyn children participated in free educational programming. Among those programs were 3,445 free public performances, 710 free admission programs, and over 5,000 classroom visits.

“The Brooklyn Cultural District is fueling a renaissance throughout Downtown Brooklyn,” said Tucker Reed, President of the Downtown Brooklyn Partnership. “New Yorkers want to live and work near world-class art, culture, and creativity. We are thrilled that Downtown Brooklyn is rapidly becoming New York City’s premier destination for all three. As this report makes clear, our cultural investments are enriching the lives of children throughout Brooklyn and serving as an engine for growth across our borough.” 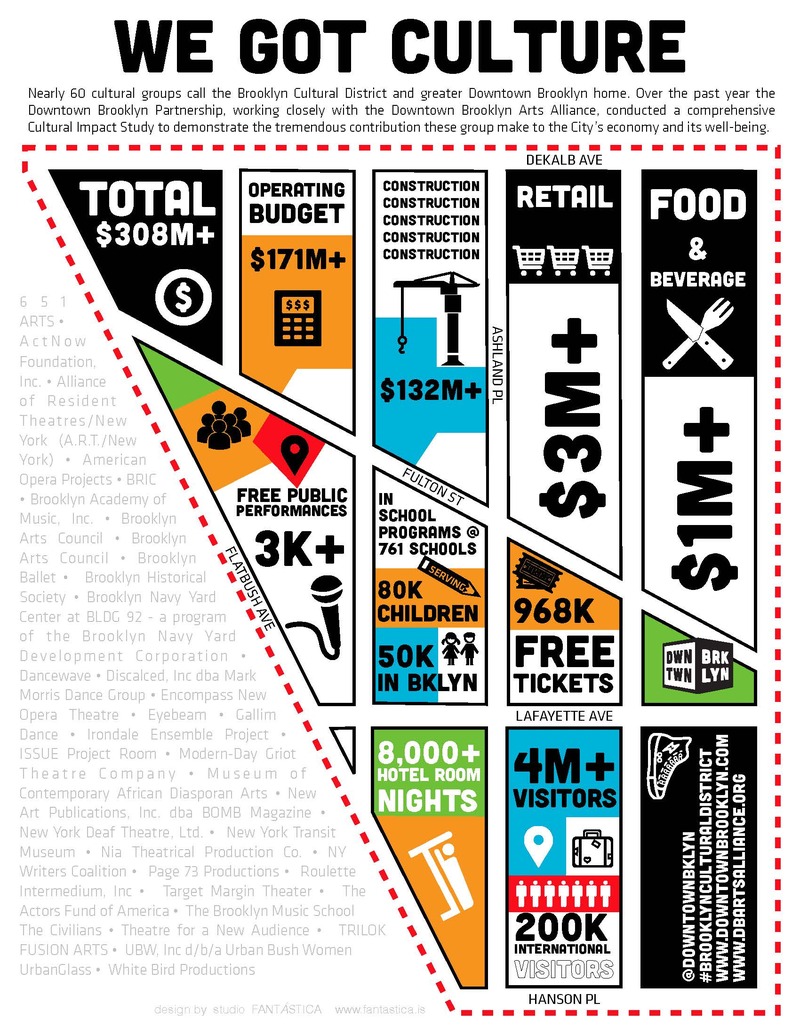